Mariah recorded "Someone's Ugly Daughter" while recording the album "Daydream" in 1995. In her memoir titled "The Meaning of Mariah Carey" Mariah revealed that she would "bring a little alt-rock song to the band and burn a silly guitar riff" She also wrote that "It was irrelevant, raw, and urgent. Mariah would "commit to her character" while "playing with the style of a breezy-grunge, punk-light white female singers who were popular at the time." Mariah admitted that recording this album allowed her to "break free, let loose and express her misery.

Mariah also expressed in her memoir that she "looked forward to doing her alter-ego sessions after recording Daydream each night.

On September 27, 2020 numerous details surrounding this album were revealed. First, Mariah tweeted that she recorded a "secret" album with her friend Clarissa.[2] Second, an article from Pitchfork revealed that Mariah wrote, produced, and sang background vocals on every song from Chick’s album.[3] She did not, however, write “Surrender,” which is a Cheap Trick cover. Mariah was also responsible for the album packaging’s art direction and directed one of the band’s music videos.

"Someone's Ugly Daughter" is isn’t currently available on streaming services, but find music videos and previews from the album online. Fans are able to purchase a CD version of the album via Amazon.[4]

Mariah stated in "The Meaning of Mariah Carey," that she created the album's cover.[5] Mariah used a pink lipstick to write the album's title over a Polaroid picture Tommy had taken of a giant dead cockroach in Italy. She also requested that a smashed-up eye shadow makeup palette was added to the cover.

Clarissa Dane is the lead singer on all eleven tracks of "Someone's Ugly Daughter."[6] Mariah provided backing/hidden vocals on each track. She is currently searching for her lead vocals and she will "not stop" until its found.[7] 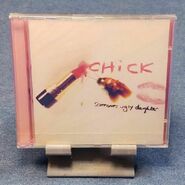 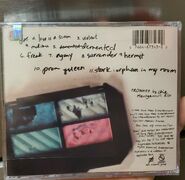 Add a photo to this gallery

Add a photo to this gallery

Retrieved from "https://mariahcarey.fandom.com/wiki/Someone%27s_Ugly_Daughter?oldid=9697"
Community content is available under CC-BY-SA unless otherwise noted.