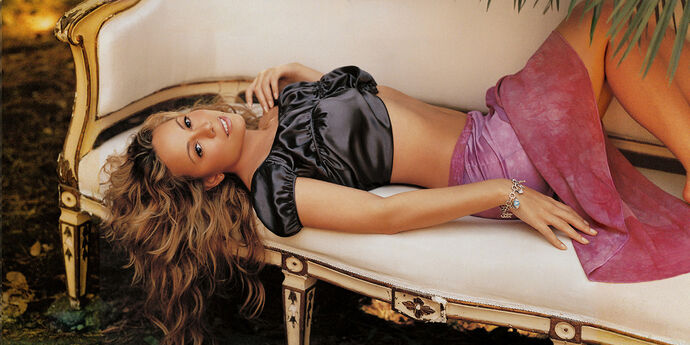 Charmbracelet is the twelfth album and eighth studio album by Amer

Singer songwriter, Mariah Carey, released her fifth studio album in The United States on December 2, 2002 by Island Def Jam Records. It was following the release of her film Glitter and its accompanying soundtrack album, Glitter, both of which had been critical and commercial failures. Sales of the album were an improvement over those of Glitter, but it was only a moderate success.

Following the negative publicity surrounding Carey's battle with exhaustion and the failure of her film and previous album, her contract with Virgin Records had been bought out. With no record label, Carey began recording new songs for another album regardless. A small bidding war soon started (though on a smaller scale than her previous one, where she had signed an $80 million dollar contract with Virgin), and Carey signed a more modest contract with Island Def Jam Records. Her new album was immediately made a priority, and executive Lyor Cohen began a game plan.

Cohen, who wanted the album to be almost "back to basics", believed that the public was still laughing at Carey, so his first action was to instruct Carey to write an "I Will Survive"-esque anthem of overcoming adversity. With her pianist Lionel Cole, Carey wrote "Through the Rain", which reflected on her personal struggles during the past year. She co-produced the track with her writing partners Jimmy Jam and Terry Lewis, and a remix of the song was created by Carey, Just Blaze, and Randy Jackson. The remix contains vocals from Joe Thomas and Kelly Price. Carey also worked with Jimmy Jam and Terry Lewis on the album track, "Yours". This was at one point supposed to feature vocals from Justin Timberlake, but his record label introduced contractual complications and the song was released with only Carey's vocals.

Having scaled back greatly on her work with Jimmy Jam and Terry Lewis, Carey decided to work with her friend (and Americian Idol judge) Randy Jackson for the first time. Together they co-produced "My Saving Grace", "Sunflowers for Alfred Roy", and "I Only Wanted". Jackson also suggested that Carey cover the rock song "Bringin' on the Heartbreak", and the two co-produced it.

Carey enlisted Just Blaze to help her create some uptempo tracks for the album. She had been very impressed with the Cam'ron song "Oh Boy" and soon pressed Cam'ron himself and Just Blaze to help her create something very similar to it. Pressure was put on them, but with empty results, and the pair finally insisted that Carey re-create "Oh Boy" as "Boy (I Need You)". Impressed with the "chipmunk vocals" of "Boy (I Need You)", Carey and Just Blaze also created "You Got Me" with a shrill "chipmunk"-sped vocal. Jay-Z and Freeway recorded some raps for the song.

As Cohen had set out for Carey, the album was her response to the public following her struggles the previous year. Although Carey has said she does not like making diss tracks, she decided to address rumors and public responses from the rapper Eminem. He and Carey had previously enjoyed a friendship that was rumoured by the media to be more than platonic. However, Eminem turned on Carey and publicly dissed her in his song "Superman". As a response, Carey (with Dre and Vidal) created the track "Clown", in which she talks about how she believes his career will end soon and criticizes his conflicts with his mother. Also with Dre and Vidal, Carey created the downbeat "Lullaby", which was rumoured to be about Carey's ex-boyfriend Derek Jeter, and related its lyrics to her past single "The Roof (Back in Time)" (1997).

Also following Cohen's "back to basics" plan, Carey decided to write and produce some songs with another old friend and frequent collaborator, Jermaine Dupri. The two created "You Had Your Chance" and the aborted single "The One". Carey also worked with another frequent collaborator, Damizza, on "Irresistible (Westside Connection)" which contains raps from the Westside Connection.

Contrary to Cohen's plan, Carey wanted to try out some new things (in addition to rock) and soon decided to work the urban producer, 7. Following years of studio work, Carey wanted to create a more organic sound. The pair created several tracks including "Subtle Invitation", "There Goes My Heart", and "Reach for the Sky". Only "Subtle Invitation" only made the final cut, although "There Goes My Heart" was later released as a non-U.S. bonus track. Carey also wrote and produced several tracks with DJ Quik, but they too were not used.

As the album neared completion, Carey felt that she needed a theme to represent it. During the production of the album, Carey's father, Alfred Roy Carey, died. Carey was especially hurt by this as she had been estranged from him for years but the two had reconciled shortly before his death. To deal with his death, she and Randy Jackson wrote the memorial "Sunflowers for Alfred Roy". To celebrate the life and times of her father, but also to help incorporate a theme to the album, Carey decided to name the album Charmbracelet. To her, the charmbracelet represented a part of a person or thing, to reflect their essence. To help her stay in touch with who she was and also to celebrate those she loved and cherished, Carey began to realize the power of the charmbracelet, and rationalized the title by explaining that she was passing the album along to her fans like a charmbracelet.

To help promote the album, Carey made guest appearances on television shows such as The Oprah Winfrey Show, The View, and The Late Show with David Letterman. As with the creation of the album, Lyor Cohen's plan was for Carey to quickly erase her public stigma with a "back to basics" approach. As a result, she was instructed to wear her hair very curly (something she had not done in years) to make the public think of her debut album, Mariah Carey (1990). Carey was also the subject of an MTV special, Shining Through the Rain. In all her public appearances, she was instructed to talk about overcoming the death of her father, her breakdown, and the failure of her film and last album. Cohen hoped that the public would relate with her anthem of overcoming struggle, "Through the Rain", to help her regain credit with the public. "Through the Rain" failed to reach the top forty on the U.S. Billboard Hot 100, though was far more successful in other countries.

With the American public largely unaware of the album itself, it debuted at number three on the U.S. Billboard 200 with 241,200 copies sold in its first week, but remained in the top twenty for just three weeks and on the chart for twenty-two. Island Def Jam quickly tried to release a second single to recover, but much indecision followed as to what song the single would be. After a long gap, "The One" was eventually chosen as the next single, and a music video began production in Japan. However, while filming the video, Carey was hounded by fans and shooting was halted. During her recovery, "The One" had not picked up substantial radio airplay, so it was decided that "Boy (I Need You)" should be the next single. The cancelled video was reshot in Japan, but despite numerous television appearances to promote the song, "Boy (I Need You)" failed, becoming Carey's first single to miss both the Hot 100 and Billboard's Bubbling Under Hot 100 Singles chart. Another track from the album, "Irresistible (Westside Connection)", had gathered enough airplay to peak at eighty-one on the Hot R&B/Hip-Hop Singles & Tracks, but had no substantial success otherwise.

Following the mediocre sales of the album and both of its singles, it was decided that Carey needed to participate in a concert tour to promote the album. The Charmbracelet: An Intimate Evening with Mariah Carey tour was organized, and was the biggest tour of Carey's career, lasting more than half of a year with almost one hundred shows in most major countries (Carey's previous tours had been restricted to a few European countries and the U.S., usually consisting of around fifteen shows). While on tour, Carey's public relations department suggested that "Bringin' on the Heartbreak" may appeal to her pop rock/Adult Top 40 audience, but it failed when it was released as a single. Despite the tour, sales of the album declined, after which plans were drawn up to re-release the album in the U.S. as a last resort. The re-release was later cancelled, although the album was re-released in Asia to support the concert tour under the title Charmbracelet: Ultra Limited Edition with four bonus, unreleased tracks and videos for "Through the Rain" and "Boy (I Need You)". Charmbracelet was eventually certified platinum by the Recording Industry Association of America, and as of 2005 it had sold over 1.1 million copies in the U.S. and 4.5 million copies worldwide. On May 18 2005 "My Saving Grace" was solicited as a promotional single to gospel radio stations across the U.S. with "Fly Like a Bird", a song from Carey's fourteenth album The Emancipation of Mimi (2005). Neither song received substantial airplay and consequently they were not released to other formats.

Retrieved from "https://mariahcarey.fandom.com/wiki/Charmbracelet?oldid=9535"
Community content is available under CC-BY-SA unless otherwise noted.